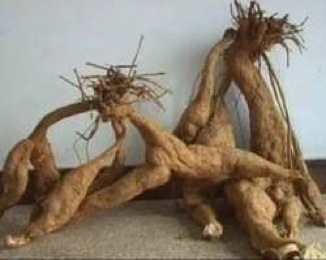 A Kudzu bulb[/caption] Whenever you drive down the interstate in Georgia you see this cool green vine stretched endlessly along power lines, walls and signs. It's Kudzu and it's encroaching mercilessly thru out the south. It's not a native plant species to the area and is largely considered a pest. Despite every effort to tame it, it just keeps coming back. It cant be beat. The secret to Kudzus resiliency is a big beefy bulb at the root base of the vine. It kind of looks like a long sweet potato. Every year the vine dies off but new green sprouts up from the bulb again like clockwork. These things are seemingly bullet proof and that's good news for you the prepper.  It turns out Kudzu is edible. I grew up in the south and had no idea, a SERE school instructor showed us in class and now I think about it every time I see the vine along an old brick wall. Atlanta is literally under attack by food! With a little elbow grease, you can dig up the bulb and throw them in a boil. They can weigh anywhere from 5lbs to 15lbs depending on the age of the plant. They are a little bitter but totally edible. Some restaurants are experimenting with new recipes as we speak in an effort to generate demand to help harvest Kudzu off the streets. You can Google plenty of recipes but in a pinch serve them up like mashed potatoes and you'll be ok. The next time you are out and about looking for a cool new prepper trick, bring home a Kudzu bulb and serve it up. It's everywhere and abundant, even in downtown Atlanta!

More in this category: CAGs NAVIGATOR course »
Login to post comments
back to top

Freya the walrus has become an icon. But…

Norway's beloved Freya the walrus could be put down due to health and safety risks, the country's Directorate of Fisheries warned on Thursday.

After temperatures reached 112 degrees in Seville, Spain, scientists for the first time have given a heat wave a name: Zoe.

Tens of thousands of Afghan allies were …

A year after the United States' withdrawal from Afghanistan, tens of thousands of allies are struggling to reach safety.

Climate crisis in Europe as drought and …

Europe is suffering under a severe heat wave and drought that has produced tragic consequences including wildfires and dry lakes.

East West Farm is a pasture based, all natural, family farm near Atlanta, GA in Cobb County. Daniel and Katie Seedorf are the husband/wife team that’s keeping the family farm...

Homemade Bacon: Fresh bacon is a world a…